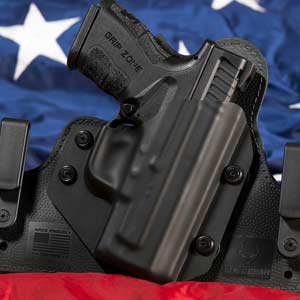 Wright & Schulte, dedicated to protecting the rights of citizens to keep and bear arms, is pleased to announce that the Ohio Second District Court of Appeals has ruled in favor of its client, a Montgomery County Man who was denied his application for a concealed carry license. The Appellant was represented by Erik R. Blaine, an attorney with the firm who focuses in Second Amendment Rights.

In 2014, the Appellant applied to the Montgomery County Sheriff for a License to Carry a Concealed Weapon. A criminal background check performed as part of the licensing process revealed the 2004 Drug Paraphernalia conviction. On May 6, 2014, the Montgomery County Sheriff denied the application due to that conviction. Moving rapidly, Erik collected the information and filed an appeal of the decision. The Montgomery County Common Pleas Court affirmed the Sherriff’s decision to deny the license, interpreting Ohio law to exclude licenses for applicants with a conviction for Possession of Drug Paraphernalia because that offense necessarily involves the use or possession of drugs of abuse.

Knowing that this decision was in error, Erik filed the appeal to the Ohio Second District Court of Appeals, where he argued that the denial of the license was contrary to law, because it was based on an erroneous interpretation of the statute that precludes licenses for those convicted of an offense involving a drug of abuse, that a conviction for paraphernalia did NOT involve a drug of abuse.

In an Opinion rendered on August 21, 2015, the appeals court found for the Appellant, noting that at the time of the application, the conduct for which he was convicted was no longer prohibited by R.C. 2925.14. Instead, the conduct was a violation of R.C. 2925.141(C), which prohibits a person from “knowingly us[ing], or possess[ing] with purpose to use, any drug paraphernalia that is equipment, a product, or material of any kind that is used by the person, intended by the person for use, or designed for use in storing, containing, concealing, injecting, ingesting, inhaling or otherwise introducing into the human body marihuana.” The commission of that offense is a minor misdemeanor, which is not to be considered in the application for a concealed handgun license. As such, the judgment of the trial court was reversed on the basis that it had abused its discretion and the case was remanded for further proceedings.

There are legal options available to individuals who have been wrongfully denied their Second Amendment Rights. To learn more about Wright & Schulte, please visit www.legaldayton.com or by calling 937-435-9999.